BACK TO ALL BLOG POSTS

ALL ABOUT OUR VIENNA ART

Our new Max Brown 7th District is in the creative heart of the world’s most livable city, Vienna. It’s not just a place to meet with friends and rest your head—we also made sure that it feeds your hunger for local art. We commissioned four Vienna artists to produce five print editions as well as one Vienna artist for one black and white photo series exclusively for our hotel. Let us give you a little tour through our very special art collection, which you can discover yourself as you explore the new space. 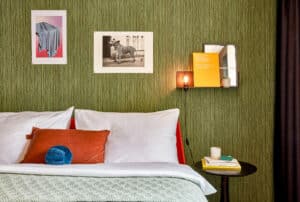 The idea behind our Max Brown Vienna art collection was not only to show great pieces of art, but also to support and promote the local art scene. Therefore, all of the artworks you’ll see at Max Brown 7th District are by Viennese artists. Four artists, seven exclusively made prints to colour your cosy stay. 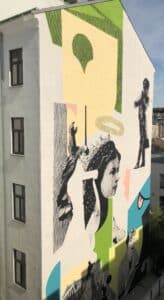 The 280-square-metre mural on the neighbouring building’s facade is a loving homage to the city of Vienna, while simultaneously putting a fresh and humourous spin on its motifs. Look for references to the Austrian parliament, a coffee house visitor, “The King of Waltzer” Johann Strauss, Empress Elisabeth “Sisi” (with a winking halo), fragments from a Viennese city palace and a skater. The work can be seen from the street, the hotel’s terrace and some of the hotel’s guest rooms. This artwork was painted by hand within one week. 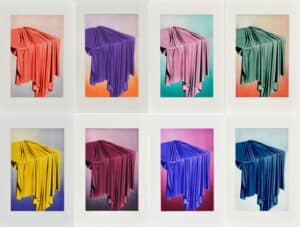 With his first ever printed edition, artist Drago Persic created a series of eight colour variations exclusively for Max Brown based on his painting titled Ivory Black. In addition to the Zebralion print, you’ll find these prints in your hotel room. Persic uses fabric and colour as a compositional and analytical theme. The drapery, with its classical composition, is painted in a realistic manner, Persic’s signature style. It has a theatrical, magical and mysterious feel to it.

Referring to Oberthaler’s similar large-scale painting titled EX, this work was inspired by an exhibition poster by the American conceptual artist Gaylen Gerber. Oberthaler saw the folded poster of Gerber’s show, and only the first two letters of the word ‘exhibition’ were visible, and he incorporated those letters into his work. The truncated typographic positioning of the EX also symbolises the translation from Latin: ”out of”. More than a visual experience, it may also trigger your creativity. How many words starting with ‘ex’ do you know?

Artist Raffaela Bielesch created three special edition black and white photographs for our hotel that depict the Dadaist performances by German avant-garde artist Elsa von Freytag-Loringhoven (1874-1927). In this series, Bielesch has reconstructed those spectacle sculptural performances of Freytag-Loringhoven, addressing subjects of authorship and documentation. In the hotel, the works have been framed in the ‘Franz West Pink’, a reference to the legendary Viennese artist.

See you in Vienna!

Return to top of page